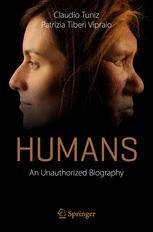 Based on the latest scientific discoveries, this “unauthorized biography” of the Humans recounts the story of our distant ancestors during the past 6 million years, since the line of our extended family separated from that leading to modern chimpanzees. The book explains how different species evolved, both anatomically and cognitively, and describes the impacts of climatic and environmental change on this process. It also explores the nature of relationships within and between species, describes their everyday lives, and discusses how isolated individuals became members of larger social groups. The concluding chapters highlight the paramount importance of the emergence of symbolic thought and discuss its contribution to the formation of institutions, societies, and economies. The multifaceted picture that emerges will help the reader to make sense not only of “what we were”, but also of “what we are”, here and now. The book is both entertaining and rigorous in integrating results from a wide selection of disciplines. It will be particularly suitable for people with a curious and open mind, keen to overcome long-standing prejudices on man's place in nature.

Claudio Tuniz is a scientist at the Abdus Salam International Centre for Theoretical Physics in Trieste, Italy, and an Associated Scientist at the Fermi Centre in Rome. He is also Visiting Professor at the Centre for Archaeological Science of the University of Wollongong in Australia and Visiting Scientist  at the Australian Nuclear Science and Technology Organization (ANSTO). Dr. Tuniz has previously published the books Radioactivity (Oxford University Press, UK, 2013), L'atomo inquieto (Carocci, Italy, 2014), The Science of Our Origins (with G. Manzi and D. Caramelli; Laterza, Italy, 2013, Left Coast Press, USA, 2014), and The Bone Readers (with R. Gillespie and C. Jones; Allen and Unwin, Australia, 2009, Left Coast Press, USA, 2009, Springer, 2010).

Patrizia Tiberi Vipraio was Full Professor of Economic Policy and Associate Professor of International Economics at the University of Udine, Italy, where she also lectured on Monetary Policy and Industrial Economics. She has been associated with various other universities in Europe and Australia. She is the author of a number of academic papers and books, including Dal mercantilismo alla globalizzazione [From Mercantilism to Globalization] (Il Mulino, Bologna, 1999).

“This great little book deserves to be read by all people concerned to understand where we, as a species, came from and how the challenges we now face reflect that long historical evolution. Serious engagement with understanding our ‘deep history’ takes us into the realms of anthropology, archaeology, natural history, geology and geography.” (Frank Stilwell, Journal of Australian Political Economy, Issue 79, 2017)