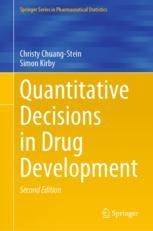 This book focuses on important decision points and evidence needed for making decisions at these points during the development of a new drug. It takes a holistic approach towards drug development by incorporating explicitly knowledge learned from the earlier part of the development and available historical information into decisions at later stages. In addition, the book shares lessons learned from several select examples published in the literature since the publication of the first edition.

The second edition reiterates the need for making evidence-based Go/No Go decisions in drug development discussed in the first edition. It substantially expands several topics that have seen great advances since the publication of the first edition. The most noticeable additions include three adaptive trials conducted in recent years that offer excellent learning opportunities, the use of historical data in the design and analysis of clinical trials, and extending decision criteria to the cases when the primary endpoint is binary. The examples used to illustrate the additional materials all come from real trials with some post-trial reflections offered by the authors.

The book begins with an overview of product development and regulatory approval pathways. It then discusses how to incorporate prior knowledge into study design and decision making at different stages of drug development. Prior knowledge includes information pertaining to historical controls. To assist decision making, the book discusses appropriate metrics and the formulation of go/no-go decisions for progressing a drug candidate to the next development stage. Using the concept of the positive predictive value in the field of diagnostics, the book leads readers to the assessment of the probability that an investigational product is effective given positive study outcomes. Lastly, the book points out common mistakes made by drug developers under the current drug-development paradigm.

The book offers useful insights to statisticians, clinicians, regulatory affairs managers and decision-makers in the pharmaceutical industry who have a basic understanding of the drug-development process and the clinical trials conducted to support drug-marketing authorization. The authors provide software codes for select analytical approaches discussed in the book. The book includes enough technical details to allow statisticians to replicate the quantitative illustrations so that they can generate information to facilitate decision-making themselves.

Christy Chuang-Stein received a bachelor degree in mathematics from the National Taiwan University and a PhD in statistics from the University of Minnesota. She retired from Pfizer as Vice President and Head of the Statistical Research and Consulting Center in July 2015, after 30 years in the pharmaceutical industry and 5 years in academia (University of Rochester). Currently, Christy is the owner and Principal Consultant of Chuang-Stein Consulting, LLC and consults broadly in the areas of pharmaceutical development and evaluation.

Christy is a Fellow of the American Statistical Association (ASA) and received the ASA’s Founders’ Award in 2012. She was the recipient of the Distinguished Achievement Award of the International Chinese Statistical Association in 2013 and the Distinguished Service Award from the National Institute of Statistical Sciences in 2020. She is also a repeat recipient of the Drug Information Association’s Donald Francke Award for Excellence in Journal Publishing and the Thomas Teal Award for Excellence in Statistics Publishing. Christy is a founding editor of the journal Pharmaceutical Statistics.

Simon is a Fellow and Chartered Statistician of the Royal Statistical Society. He previously worked as a Lecturer, Senior Lecturer then Principal Lecturer in Statistics at Liverpool John Moores University and as a Statistician at the U.K.’s Institute of Food Research, Rothamsted Experimental Station and Revlon Healthcare.
Show all