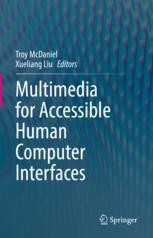 The book Multimedia for Accessible Human Computer Interfaces is to be the first resource to provide in-depth coverage on topical areas of multimedia computing (images, video, audio, speech, haptics, VR/AR, etc.) for accessible and inclusive human computer interfaces. Topics are grouped into thematic areas spanning the human senses: Vision, Hearing, Touch, as well as Multimodal applications. Each chapter is written by different multimedia researchers to provide complementary and multidisciplinary perspectives. Unlike other related books, which focus on guidelines for designing accessible interfaces, or are dated in their coverage of cutting edge multimedia technologies, Multimedia for Accessible Human Computer Interfaces takes an application-oriented approach to present a tour of how the field of multimedia is advancing access to human computer interfaces for individuals with disabilities.

Troy McDaniel is an Assistant Professor of Engineering in the Polytechnic School at Arizona State University. He is the Director of the Center for Cognitive Ubiquitous Computing and the HAPT-X Laboratory. His research interests span the areas of haptic interfaces, human-robot interaction, human-computer interaction, and smart cities. He is particularly interested in tactile vision sensory substitution and haptic human augmentation. He focuses on applications involving assistive, rehabilitative, and healthcare technologies for individuals with sensory, cognitive, or physical impairments. Within these applications, he explores new haptic interaction paradigms and novel mappings between modalities to convey information in alternative ways. He is also actively exploring challenges related to accessibility and health & well-being within smart city and smart living applications using person- and citizen-centered approaches. He has authored more than 50 peer-reviewed publications and co-edited Haptic Interfaces for Accessibility, Health, and Enhanced Quality of Life. He holds a bachelor’s and Ph.D. degree in Computer Science from Arizona State University.

Xueliang Liu is a Professor in School of Computer Science and Information Engineering in Hefei University of Technology, China. His research interests include multimedia retrieval, social media analysis and object detection. He has authored over 40 journal and conference papers in these areas. He has served as the area chair of ACM Multimedia, and on technical program committees of numerous multimedia and information retrieval conferences including ACM Multimedia (MM), ACM SIGIR, International Conf. on Multimedia Retrieval (ICMR) and International Conf. on Multimedia and Expo (ICME). He has received the outstanding service award at PCM 2018, the best reviewer award at PCM 2013, and the best demo award at ACM MM 2007. He has also been the program chair of the ACM workshop on Multimedia for Accessible Human Computer Interfaces, and the organizing chair of ICIMCS 2013, MMM 2016, and PCM 2018. He received his Ph.D and MSc from EURECOM France and USTC China in 2013 and 2008 respectively.