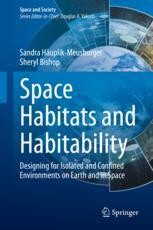 Designing for Isolated and Confined Environments on Earth and in Space

This book explores creative solutions to the unique challenges inherent in crafting livable spaces in extra-terrestrial environments. The goal is to foster a constructive dialogue between the researchers and planners of future (space) habitats. The authors explore the diverse concepts of the term Habitability from the perspectives of the inhabitants as well as the planners and social sciences.

The book provides an overview of the evolution and advancements of designed living spaces for manned space craft, as well as analogue research and simulation facilities in extreme environments on Earth. It highlights how various current and future concepts of Habitability have been translated into design and which ones are still missing. The main emphasis of this book is to identify the important factors that will provide for well-being in our future space environments and promote creative solutions to achieving living spaces where humans can thrive. Selected aspects are discussed from a socio-spatial professional background and possible applications are illustrated.

Human factors and habitability design are important topics for all working and living spaces. For space exploration, they are vital. While human factors and certain habitability issues have been integrated into the design process of manned spacecraft, there is a crucial need to move from mere survivability to factors that support thriving. As of today, the risk of an incompatible vehicle or habitat design has already been identified by NASA as recognized key risk to human health and performance in space. Habitability and human factors will become even more important determinants for the design of future long-term and commercial space facilities as larger and more diverse groups occupy off-earth habitats.

The book will not only benefit individuals and organizations responsible for manned space missions and mission simulators, but also provides relevant information to designers of terrestrial austere environments (e.g., remote operational and research facilities, hospitals, prisons, manufacturing). In addition it presents general insights on the socio-spatial relationship which is of interest to researchers of social sciences, engineers and architects.

Sandra Häuplik-Meusburger, PhD, is an architect and researcher specializing in compact habitability design solutions for extreme environments. She teaches at the Institute for Architecture and Design at the Vienna University of Technology and is appointed academic director of the course Space at the Science Academy in Lower Austria. Sandra uses cross-program comparison and analysis of inhabited isolated, confined and extreme environments (ICEs) on Earth and Space from a human perspective as a basis for the systematic assessment of existing and future living and working environments. She is corresponding member of the International Academy of Astronautics (IAA) and Vice-chair of the Space Architecture Technical Committee (SATC) of the American Institute of Aeronautics and Astronautics. Sandra has published several scientific papers and is author of the book 'Architecture for Astronauts' (Springer, 2011) and ‘Space Architecture Education for Engineers and Architects’ (Springer, 2016).

Sheryl L. Bishop, PhD, is a social psychologist and behavioral scientist who has applied her skills widely over her career. A Professor Emeritus at the University of Texas Medical Branch, she has taught in all four schools, Medicine, Nursing, Health Sciences and the Graduate School of Biomedical Sciences as well as served as faculty for the International Space University, Strasbourg, France. As an internationally recognized behavioral researcher in extreme environments, for the last 35 years Dr. Bishop has investigated human performance and group dynamics in teams in extreme, unusual environments, involving deep cavers, mountain climbers, desert survival groups, polar expeditioners, Antarctic winter-over groups and various simulations of isolated, confined environments for space, including a number of missions at remote habitats. She has routinely presented her research at numerous scientific conferences, has over 60 publications (including contribution to NASA’s Historical Series on Psychology in Space) and over 50 scholarly presentations in both the medical and psychological fields. She is frequently sought out as a content expert by various media and has participated in several television documentaries on space and extreme environments by Discovery Channel, BBC and 60 Minutes.