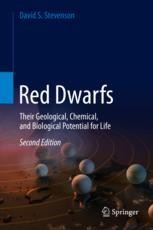 Their Geological, Chemical, and Biological Potential for Life

This thought-provoking book looks at the nature of red dwarf systems as potential homes for life. Realistically, what are the prospects for life on these distant worlds? Could life evolve and survive there? How do these planetary surfaces and geologies evolve? How would life on a planet orbiting a red dwarf differ from life on Earth? And what are the implications for finding further habitable worlds in our galaxy?

The author provides readers with insight into the habitability of planets and how this changes as time progresses and the central star evolves. Since the previous 2013 edition Under a Crimson Sun, there has been a rise in newly discovered planets orbiting red dwarfs, accompanied by controversial areas of research that test what we think we know about these systems. This revised edition delves into the wealth of new material uncovered since that date. It explains the often conflicting results and analyses put forward and clarifies our understanding of these exciting new worlds.

The chapters explore the full width of relevant scientific discovery and speculation on the potential for red dwarf planets to host life. New content includes improved atmospheric models, new understandings of the impact of stellar radiation on the atmosphere of red dwarf worlds, tidal-locking, and comparisons with terrestrial geology and climate.
Show all
About the authors

David Stevenson was born in Paisley, Scotland, in 1968. He studied Molecular Biology at Glasgow University and obtained a PhD in Genetics from the University of Cambridge. He then studied Astronomy and Planetary Sciences and Geophysics and Geochemistry (S267) at the OU.

After a stint in academia, Stevenson became a teacher, but continued to write science articles for various publications. In July 2007 an article on Type Ia Supernovae, “A Bigger Bang,” was published in Sky & Telescope, with a second article on supernovae published in the same magazine in October 2011. Three books have followed on supernovae, red dwarf stars and star clusters (Extreme Explosions, Under a Crimson Sun and The Complex Life of Star Clusters, respectively). A further article on stellar mergers is at the production stages with Astronomy magazine, while a spin-off article from Extreme Explosions, “Supersized Stellar Mystery,” was published in Popular Astronomy in February 2014.

Despite a background in Biology, the author’s father inspired his interest in Astronomy from an early age. Many parallels can be drawn between the lives of people and those of stars -- a thought that is explored in his most recent Springer book, The Nature of Life and Its Potential to Survive. Exploring the cross-roads of different scientific disciplines is a key interest and motivation in both Stevenson's teaching and writing.