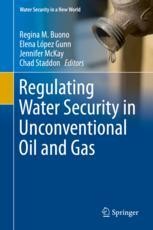 This book addresses the need for deeper understanding of regulatory and policy regimes around the world in relation to the use of water for the production of ‘unconventional’ hydrocarbons, including shale gas, coal bed methane and tight oil, through hydraulic fracturing. Legal, policy, political and regulatory issues surrounding the use of water for hydraulic fracturing are present at every stage of operations. Operators and regulators must understand the legal, political and hydrological contexts of their surroundings, procure water for use in the fracturing and extraction processes, gain community cooperation or confront social resistance around water, collect flow back and produced water, and dispose of these wastewaters safely. By analysing and comparing different approaches to these issues from around the globe, this volume gleans insights into how policy, best practices and regulation may be developed to advance the interests of all stakeholders. While it is not always possible to easily transfer ‘good practice’ from one place to another, there is value in examining and understanding the components of different legal and regulatory regimes, as these may assist in the development of better regulatory law and policy for the rapidly growing unconventional energy sector.

The book takes an interdisciplinary approach and includes chapters looking at water-energy nexus security in general, along with issue-focused and geographically-focused case studies written by scholars from around the world.

Chapter topics, organized in conjunction with the stage of the shale gas production process upon which they touch, include the implications of hydraulic fracturing for agriculture, municipalities, and other stakeholders competing for water supplies; public opinion regarding use of water for hydraulic fracturing; potential conflicts between hydraulic fracturing and water as a human right; prevention of induced seismic activity, and the disposal or recycling of produced water.   Several chapters also discuss implications of unconventional energy production for indigenous communities, particularly as regards sustainable water management.

This volume will be of interest to scholars and students of energy and water, regulators and policymakers and operators interested in ensuring that they align with emergent best global practice.

Regina M. Buono is a nonresident scholar at the Center for Energy Studies (CES) at Rice University’s Baker Institute for Public Policy and a doctoral student in public policy at the Lyndon B. Johnson School of Public Affairs at The University of Texas at Austin. She previously served as the Baker Botts Fellow in Energy and Environmental Regulatory Affairs at CES. Prior to that, she was an associate with McGinnis, Lochridge & Kilgore, LLP, in Austin, Texas, focusing her practice in the areas of water, administrative, and endangered species law. Buono has also worked in various roles with the Texas Legislature and as a consultant to oil and gas companies, designing a habitat credit exchange to achieve compliance with the U.S. Endangered Species Act. She holds bachelor’s degrees in international relations, political science, and Spanish from the University of Arkansas, a J.D. from The University of Texas School of Law, and an M.Sc. in water science and governance from King’s College London.

Chad Staddon is Professor of Resource Economics and Policy in the Department of Geography and Environmental Management at the University of the West of England, Bristol in the UK.  Originally from Vancouver, Canada he has lived and worked in more than a dozen countries around the world on issues related to resource economics and management, particularly in the forestry and water sectors.  In the 20 years since achieving his PhD he has published more than 75 articles and book chapters, given more than 100 conference presentations and guest lectures, reviewed funding applications for most of the major funding organisations and regularly advises governments around the world on water policy issues.  His current research interests include the water-energy nexus, the behavioural economics and domestic water consumption and decentralised water systems for underserved communities in the Global South.  He is the Director for the International Water Security Network, a global network of centre of excellent in different dimensions of water security research and capacity building.