This year’s Julius Springer Prize for Applied Physics for outstanding research in materials science and its applications was awarded to Roland Wiesendanger (Hamburg) and Xiang Zhang (Berkeley, CA). The award, accompanied by US$ 5,000, was presented to the scientists at the Haus der Patriotischen Gesellschaft in Hamburg on 27 May 2016 during the “Julius Springer Forum on Applied Physics.” 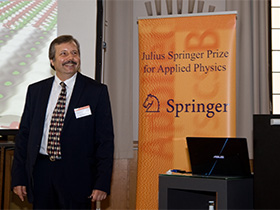 Roland Wiesendanger received the award for his pioneering work on spin-polarized scanning tunneling microscopy and magnetic exchange force microscopy, which has made it possible to study magnetism at the level of individual atoms and investigate the atomic-scale spin structure of condensed matter. Wiesendanger is professor of experimental physics at the University of Hamburg and head of the Interdisciplinary Nanoscience Center Hamburg. He also heads the Collaborative Research Center “Magnetism from the Single Atom to the Nanostructure” based at the German Research Foundation. At the end of the eighties, Roland Wiesendanger pioneered the technique of spin-polarized scanning tunneling microscopy and spectroscopy which allowed the first real-space observation of magnetic structures at the atomic level. 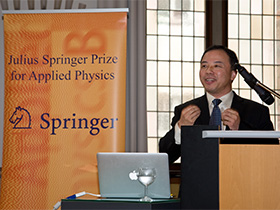 Xiang Zhang was being presented with the award for his pioneering work on optical metamaterials and nanophotonics. His seminal experimental discoveries include the far field optical super lens that breaks the fundamental diffraction limit, the optical invisibility cloak and the plasmon lasers. His work has a major impact in optical physics and technology such as optical imaging, lithography, and photovoltaics. Zhang is the Ernest S. Kuh Professor at the University of California at Berkeley and the Director of the Materials Sciences Division at Lawrence Berkeley National Laboratory. Zhang’s research was selected by the Time magazine in 2008 as one of the “Top Ten Scientific Discoveries of the Year.” He is an elected member of the US National Academy of Engineering (NAE) and a recipient of prestigious awards including the Max Born Award and the Fitzroy Medal.