Read science and science fiction for a good cause

Springer Nature and Humble Bundle are partnering in a book campaign supporting the U.S. Fund for UNICEF and the Science Fiction & Fantasy Writers of America’s Givers Fund 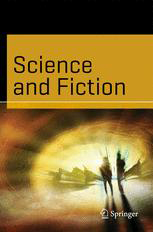 Springer, a leading science publisher, is partnering with Humble Bundle in the science fiction book campaign “Science Fiction by Real Scientists.” The books included in the offer are part of Springer’s Science and Fiction series, and are authored by practicing scientists as well as writers of hard science fiction. Readers can choose how their purchase dollars are allocated between the publisher and charity. The “Humble Book Bundle: Science Fiction by Real Scientists” supports the U.S. Fund for UNICEF and the Science Fiction & Fantasy Writers of America’s Givers Fund and runs through September 28, 2016.

The Springer series Science and Fiction was launched in 2012 and comprises entertaining and thought-provoking books which appeal equally to science buffs, scientists and science fiction fans. The idea was born out of the recognition that scientific discovery and the creation of plausible fictional scenarios are often two sides of the same coin. Each science fiction book, with an afterword on the science underlying the tale, relies on an understanding of the way the world works, coupled with the imaginative ability to invent new or alternative explanations and even other worlds.

Christian Caron, Executive Editor Physics at Springer, said the concept developed when a Springer author, astrobiologist Dirk Schulze-Makuch, published his first hard science fiction novel on Amazon. “Our very first thought was, why couldn’t we do this?” he said. “Our authors, all of them scientists and experts at some forefront of research, would of course have an interface with speculative science in their fields.”

The books in Springer’s Science and Fiction series explore and exploit the borderlands between accepted science and its fictional counterpart. Uncovering mutual influences, promoting fruitful interaction, and narrating and analyzing fictional scenarios, they serve as a reaction vessel for inspired new ideas in science, technology and beyond.

The “Humble Book Bundle: Science Fiction by Real Scientists” includes nine full novels, two books of short stories and five nonfiction books. On a pay-what-you-want basis starting at just one dollar, customers can name their price, increasing their contribution to upgrade their bundles or contribute more to charity.