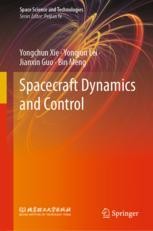 Dr. Yongchun Xie is Professor and the director of the Science and Technology Committee of Beijing Institute of Control Engineering. She is currently a corresponding member of IAA (International Academy of Astronautics) and has been engaged in the field of guidance, navigation, and control (GNC) of spacecraft rendezvous and docking (RVD) for nearly 20 years. She has participated in China's manned space project as a leading engineer responsible for the design of GNC systems, which have been implemented in the RVD tasks of China's spacecraft. Her research interests include autonomous guidance and rendezvous control, and intelligent control of spacecraft. She has published more than 100 articles in technical journals and conferences, authored 3 books, and won five ministry-level prizes and three national-level awards.

Professor Yongjun Lei is currently a senior chief designer of spacecraft control systems at Beijing Institute of Control Engineering. He has been engaged in the control scheme design for high- performance low-orbit satellites. His research interests include modeling and control of complicated systems, such as flexible structures and multi-body spacecraft. He has won six ministerial level prizes (first class once, second class three times, and third class twice).

Professor Jianxin Guo is a director designer of medium- and high-orbit satellite control systems at Beijing Institute of Control Engineering. He has been engaged in the control scheme design for the BEIDOU navigation satellite system and a new generation communication satellites of China. His current research interests include spacecraft orbit control and multi-body spacecraft complex control. He has won four ministerial level prizes (first class three times and second class once).

Bin Meng is Professor at the Beijing Institute of Control Engineering, where she was a postdoctoral fellow from 2005 to 2007. She received her Ph.D. degree in control theory and application from the Chinese Academy of Sciences in 2005. From 2016 to 2017, she was Visiting Academic at the University of Leeds, UK. Her majors are spacecraft guidance and control, and adaptive control theory and applications. As Principle Investigator or Co-investigator, she has led or been involved in more than 10 research projects. She has published more than 30 research articles and 5 book chapters and has been granted 5 patents. She has won various awards, such as the 2nd prize of the 2013 National Technological Invention Award.