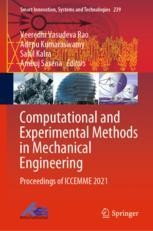 This book includes selected peer-reviewed papers presented at third International Conference on Computational and Experimental Methods in Mechanical Engineering held in June 2021 at G.L. Bajaj Institute of Technology and Management, Greater Noida, U.P, India. The book covers broad range of topics in latest research including hydropower, heat transfer, fluid mechanics, advanced manufacturing, recycling and waste disposal, solar energy, thermal power plants, refrigeration and air conditioning, robotics, automation and mechatronics, and advanced designs. The authors are experienced and experts in their field, and all papers are reviewed by expert reviewers in respective field. The book is useful for industry peoples, faculties, and research scholars.

Veeredhi Vasudeva Rao holds Bachelor’s Degree in Mechanical Engineering and Master’s Degree with specialization in Heat Transfer from Andhra University, India. He holds a Doctoral Degree from the Indian Institute of Science (IISc) Bangalore, India, with specialization in Heat Transfer from faculty of engineering. During his studies at master’s and doctoral level, he was a recipient of (GATE) National Scholarship and Council of Scientific and Industrial Research (CSIR) fellowships, respectively. He was Postdoctoral Fellow at Nanyang Technological University, Singapore. Formerly, he was Principal of SreeNidhi Institute of Science and Technology, Hyderabad, India. He was also Director of Technology Development and Test center (TDTC) recognized by Government of India. He has published more than 100 research papers in peer-reviewed National and International Journals of repute and peer-reviewed conference proceedings. He has guided 4 Doctoral Research Scholars and 25 master’s students for successful completion. He has presented several research papers in international conference in India and the USA.
Dr. Adepu Kumaraswamy graduated in Mechanical Engineering from Kakatiya University, Warangal, Telangana, India, in 1992 and received Master’s in Design and Production Engineering from National Institute of Technology (NIT), Warangal, in 1995. Subsequently, he has pursued doctoral research work in the area of static and dynamic indentation behavior of materials for defence applications at Osmania University, Hyderabad, in 2008. He has authored 36 publications in reputed journals and good number of publications in various conferences. He was Principal Investigator of three sponsored R&D projects in the area of tribological studies of hydraulic seals, impact mechanics and high strain rate deformation behavior of materials for defence applications. He has 13 years of post-M.Tech. and 12 years of post-Ph.D. teaching experience. He was Professor and Associate Dean (R&D) at SNIST (autonomous institution), Hyderabad, during 2008–2010. He is currently Professor in Mechanical Engineering, Head, Department of Technology Management, and Head, Materials Management Group, Defence Institute of Advanced Technology (DU), Pune, funded by Department of Defence R&D, Ministry of Defence, Government of India.  He has guided four Ph.Ds, one MS (R) and over fifty M.Tech. projects and currently guiding six Ph.D. students.
Sahil Kalra was born in Kaithal, a small city in Haryana. He completed his B.Tech. in Mechanical Engineering from Kurukshetra University in 2011. During his B.Tech. degree, he received a full tuition fee waiver from the university. In his first attempt, he qualified GATE exam with 96 percentile and joined M.Tech. in the Department of Mechanical Engineering, NIT Jalandhar. Based on the performance, he was given an opportunity to serve as Assistant Professor in the same institute. However, after serving for one semester, he moved to IIT Kanpur as a full-time Ph.D. student. There he worked on a research project sponsored by Space Application Centre, Ahmedabad, Indian Space Research and Organization (ISRO). He worked jointly with the ISRO scientists and developed a reconfigurable antenna for space applications. He defended his Ph.D. degree in May 2, 2019. From his Ph.D. research, he has published four reputed International Journal articles, two patents and six conferences, and symposiums. He is recipient of two international and two national awards at different conferences and symposiums. He has been offered a prestigious fellowship, namely Faculty in Science and Engineering, at the University of Groningen (QS ranking 65) in the Netherlands (Europe). Currently, he is serving as Assistant Professor in the Department of Mechanical Engineering, IIT Jammu. His research interests are system dynamics and control, mechatronics, robotics, vibration control, modal analysis, smart materials and smart structures. He is passionate about the algorithm development for different finite element method-based engineering problems and its solution using using Abaqus and MATLAB.
Dr. Ambuj Saxena completed his bachelor degree in Mechanical Engineering Department from Uttar Pradesh Technical University, Lucknow (Uttar Pradesh), India, in 2008. In his first attempt, he qualified GATE 2008 exam with 85.18 percentile and completed Master’s degree in Mechanical Engineering from Dr. B R Ambedker National Institute of Technology (NIT), Jalandhar, in 2011. Further, he was completed his doctoral degree (Ph.D.) in the area of constitutive modelling and high strain rate deformation behavior of armor steel weldments for defence applications at Defence Institute of Advanced Technology (DIAT-DU), Pune, in 2019. He has completed his doctoral work research experimentation at Defence Metallurgical  Research Laboratory, Hyderabad. He has authored 21 SCI/SCIE and 5 Scopus publications in reputed journals. He has published 3 research papers at the reputed international conference. He is the reviewer of several international journals. He is currently working as an Associate Professor in the Department of Mechanical Engineering, G. L. Bajaj Institute of Technology and Management, Greater Noida. He is a lifetime member of the Indian Structural Integrity Society (InSIS).