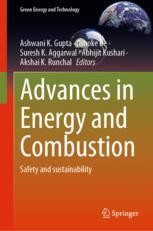 Advances in Energy and Combustion

This book provides state-of-the-art advances in several areas of importance in energy, combustion, power, propulsion, environment using fossil fuels and alternative fuels, and biofuels production and utilization. Availability of clean and sustainable energy is of greater importance now than ever before in all sectors of energy, power, mobility and propulsion.
Written by internationally renowned experts, the latest fundamental and applied research innovations on cleaner energy production as well as utilization for a wide range of devices extending from micro scale energy conversion to hypersonic propulsion using hydrocarbon fuels are provided. The tailored technical tracks and contributions from the world renowned technical experts are portrayed in the respective field to highlight different but complementary views on fuels, combustion, power and propulsion and air toxins with special focus on current and future R&D needs and activities.
The energy and environment sustainability require a multi-pronged approach involving development and utilization of new and renewable fuels, design of fuel-flexible combustion systems that can be easily operated with the new fuels, and develop novel and environmentally friendly technologies for improved utilization of all kinds of gas, liquid and solid fuels. This volume is a useful book for practicing engineers, research engineers and managers in industry and research labs, academic institutions, graduate students, and final year undergraduate students in Mechanical, Chemical, Aerospace, Energy and Environmental Engineering.

Dr. Ashwani K. Gupta is a Distinguished University Professor at the University of Maryland (UMD), USA. He obtained his Ph.D. and D.Sc. from the University of Sheffield, UK. He was awarded D.Sc. from Southampton University, UK, and Honorary Doctorates from the University of Wisconsin–Milwaukee, USA, King Mongkut’s University of Technology North Bangkok, Thailand, and University of Derby, UK. He received the President Kirwan Research Award and College of Engineering Research Award at UMD. He has received several honors and awards from AIAA and ASME, and has co-authored over 800 papers, 3 books, 5 patents, and edited 18 books in the areas of combustion, swirl flows, high temperature air combustion (HiTAC), distributed combustion, wastes to energy, acid gas treatment, fuel reforming, and air pollution. He is Honorary Fellow of ASME and RAeS (UK), and Fellow of AIAA, SAE, and AAAS.

Dr. Suresh K. Aggarwal received his Ph.D. from Georgia Institute of Technology, Atlanta, USA. He was a member of the research staff at Princeton University, New Jersey, USA and a Senior Research Engineer at CMU. He then joined the University of Illinois at Chicago, USA and was promoted to Professor in 1995. He served as Director of Graduate Studies, and was also a Visiting Scientist at ANL, Visiting Professor at Ecole Centrale-Paris, France and Guest Professor at Jiangsu University, China. His research interests include Combustion, Multiphase Reacting Flows, Emissions, Clean Energy, and Fire Suppression. He has authored over 340 publications and graduated 17 Ph.D. and 46 MS students. He is Fellow of ASME, AAAS and Associate Fellow of AIAA.

Dr. Abhijit Kushari is Professor in the Department of Aerospace Engineering, Indian Institute of Technology (IIT) Kanpur, India. Dr. Kushari received his Ph.D. from Georgia Institute of Technology, Atlanta, Georgia, in 2000 and joined IIT Kanpur as an Assistant Professor in 2001. He became a Professor in 2014. His research interests are Aerospace Propulsion, Gas Turbine engines, Turbo-machinery, Liquid Atomization Flow Control and Combustion Dynamics. He has authored more than 130 technical papers. He has supervised 6 PhD and 50 M.Tech theses in Aerospace Propulsion fields.

Dr. Akshai K. Runchal is an expert in Computational Fluid Dynamics (CFD) and numerical simulation of flow, heat and mass transport processes in engineering and environmental sciences. In late 1960’s under the guidance of Prof. D.B. Spalding at Imperial College, London, Dr. Runchal, and Dr. Wolfshtein, developed the Finite Volume Method (FVM) for CFD applications. His experience spans a range of problems including those related to design, production, operation and environmental impact of industrial and urban projects. One of his specific areas of expertise has been analysis and management of natural and man-made disaster scenarios. Dr. Runchal received his Ph.D. from Imperial College, London (UK) in 1969 and a Bachelor of Engineering with Honors from Punjab Engineering College (Chandigarh, India) in 1964. He has taught and guided research students at UCLA, Cal Tech, CSU (Northridge), Imperial College (London), and I.I.T. (Kanpur). He is the author or co-author of 6 books and over 200 technical publications. He has delivered keynote and invited talks at more than 100 conferences and seminars in the U.S.A., the U.K., France, Germany, India, Australia, Belgium, Sweden, Croatia, Czechoslovakia and Slovenia.
Show all