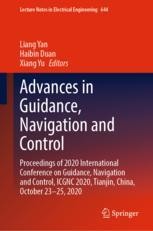 Advances in Guidance, Navigation and Control

Presenting recent advances in the form of illustrations, tables, and text, it also provides detailed information of a number of the studies, to offer readers insights for their own research. In addition, the book addresses fundamental concepts and studies in the development of GNC, making it a valuable resource for both beginners and researchers wanting to further their understanding of guidance, navigation, and control.

Dr. Liang Yan holds a Ph.D. degree from Nanyang Technological University (NTU), Singapore. He has worked as a Lecturer at Beijing Institute of Technology, as a Research Fellow at Nanyang Technological University, and as Associate Professor and Professor at Beihang University (BUAA). He is currently a Changjiang Distinguished Professor at BUAA. His research mainly focuses on high-performance actuation technology and its applications in robotics and aerospace technology. He is a member of the Technical Committee of the Robotics and Mechatronics Organization, International Federation for the Promotion of Mechanism and Machine Science (IFToMM), the Electrical Machines Technical Committee of the IEEE Industrial Electronics Society, and the Mechatronic Technical Committee of the Chinese Society of Aeronautics and Astronautics. He has been the Program Chairman and Publication Chairman of more than 10 IEEE/ASME/IET conferences.

Dr. Haibin Duan is currently a full Professor at the School of Automation Science and Electrical Engineering, Beihang University (BUAA), Beijing, China. He received his Ph.D. degree in control theory and engineering from Nanjing University of Aeronautics and Astronautics (NUAA) in 2005. He was a senior visiting scholar of The University of Suwon (USW) in South Korea (2011). He is the Vice Director of the State Key Laboratory of Virtual Reality Technology and Systems and the Head of the Bio-Inspired Autonomous Flight Systems Research Group. Prof Duan is the chair of Technical Committee on Guidance, Navigation and Control (TCGNC), Chinese Society of Aeronautics and Astronautics (CSAA), and the chair of Technical Committee on Unmanned Aerial Systems Autonomous Control (TCUASAC), Chinese Association of Automation (CAA). He is also a visiting research fellow with Peng Cheng Laboratory, China. Prof. Duan received the National Science Fund for Distinguished Young Scholars of China in 2014. He is also enrolled in the Chang Jiang Scholars Program of China, Scientific and Technological Innovation Leading Talent of “Ten Thousand Plan”-National High Level Talents Special Support Plan, and Top-Notch Young Talents Program of China. He is currently an Associate Editor of the IEEE Transactions on Cybernetics. Prof. Duan has authored or co-authored more than 70 publications. His current research interests are bio-inspired intelligence, and multi-UAV autonomous swarm control.

Dr. Xiang Yu received the B.S., M.S., and Ph.D. degrees in automation science and engineering from Northwestern Polytechnical University, Xi’an, China, in 2003, 2004, and 2008, respectively. He is currently a Professor with the School of Automation Science and Electrical Engineering, Beihang University, Beijing, China. He was a Post-Doctoral Research Fellow with the Department of Electrical and Computer Engineering, Western University, London, ON, Canada, and a Research Associate with the Department of Mechanical, Industrial and Aerospace Engineering, Concordia University, Montreal, QC, Canada. He has authored over 40 prestigious journal papers, including IEEE Transactions, AIAA Journals, and Progress in Aerospace Sciences. His current research interests include safety control of aerospace engineering systems, autonomous navigation and control of unmanned aerial vehicles. Prof. Yu was a recipient of the Recruitment Program for Young Professionals, the Best Paper and Best Paper Finalist at international conferences. He has also served as the Associate Editor of Asian Journal of Control, Associate Editor of Chinese Journal of Aeronautics, Program Co-Chair, Invitation Chair, and IPC Member of several academic conferences.