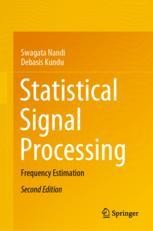 This book introduces readers to various signal processing models that have been used in analyzing periodic data, and discusses the statistical and computational methods involved. Signal processing can broadly be considered to be the recovery of information from physical observations. The received signals are usually disturbed by thermal, electrical, atmospheric or intentional interferences, and due to their random nature, statistical techniques play an important role in their analysis. Statistics is also used in the formulation of appropriate models to describe the behavior of systems, the development of appropriate techniques for estimation of model parameters and the assessment of the model performances. Analyzing different real-world data sets to illustrate how different models can be used in practice, and highlighting open problems for future research, the book is a valuable resource for senior undergraduate and graduate students specializing in mathematics or statistics.

Professor Debasis Kundu received his B-Stat and M-Stat from the Indian Statistical Institute in 1982 and 1984, respectively, MA in Mathematics from the University of Pittsburgh in 1985 and Ph.D. from the Pennsylvania State University in 1989 under the guidance of Professor C.R. Rao. After ﬁnishing his Ph.D. he joined The University of Texas at Dallas as an Assistant Professor before joining Indian Institute of Technology Kanpur in 1990. He served as the Head of the Department of Mathematics and Statistics, IIT Kanpur from 2011 to 2014, currently he is the Dean of Faculty Aﬀairs at IIT Kanpur. Professor Kundu works on diﬀerent areas of Statistics. His major research interests are on Distribution Theory, Lifetime Data Analysis, Censoring, Statistical Signal Processing and Statistical Computing. He has published more than 300 research papers in diﬀerent refereed journals with close to 12,000 citations and H-index 55. He has supervised/ co-supervised 14 Ph.D. and 5 M.Tech students. He has co-authored two research monographs on Statistical Signal Processing and on Step-Stress Models, and co-edited one book on Statistical Computing. He is a Fellow of the National Academy of Sciences, India and a Fellow of the Indian Society of Probability and Statistics. He has received Chandana Award from the Canadian Mathematical Society, Distinguished Statistician Award from the Indian Society of Probability and Statistics, P.C. Mahalanobis Award from the Indian Society of Operation Research and Distinguished Teacher’s Award from IIT Kanpur. He is currently the Editor-in-Chief of the Journal of the Indian Society of Probability and Statistics, and in the editorial boards of Communications in Statistics - Theory and Methods, Communications in Statistics - Simulation and Computation, Communications in Statistics - Case Studies and Sankhya, Ser. B. He has served as members in the editorial boards of the IEEE Transactions on Reliability, Journal of Statistical Theory and Practice and Journal of Distribution Theory.

Swagata Nandi is currently an Associate Professor at the Theoretical Statistics and Mathematics Unit of the Indian Statistical Institute, Delhi Center. She received her M.Sc. and Ph.D. from the Indian Institute of Technology, Kanpur. In her Ph. D, she worked under the guidance of Professor Debasis Kundu and Professor S. K. Iyer. Before joining Indian Statistical Institute in 2005, she was a Postdoctoral Fellow at the University of Heidelberg and at the University of Mannheim, Germany. Her research interests include statistical signal processing, nonlinear regression, analysis of surrogate data, EM algorithms and survival analysis. She has published more than 35 research papers in various national and international journals and co-authored a monograph on Statistical Signal Processing. She is the recipient of the Indian Science Congress Association Young Scientist award and the C.L. Chandana Award for Students.