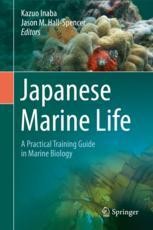 About this Textbook
This book gives an overview of the diverse marine fauna and flora of Japan and includes practical guides for investigating the biology and ecology of marine organisms. Introducing marine training courses offered at a range of Japanese universities, this is the first English textbook intended for marine biology instructors and students in Japan. It provides essential information on experimental procedures for the major areas of marine biology, including cell and developmental biology, physiology, ecology and environmental sciences, and as such is a valuable resource for those in Asian countries that share a similar flora and fauna. It also appeals to visitors interested in attending Japanese marine courses from countries around the world.

Kazuo Inaba holds a PhD from the Graduate School of Science, University of Tokyo (1990). He was an Assistant Professor at Misaki Marine Biological Station, University of Tokyo (1990-1998); Visiting Scientist, Worcester Foundation for Experimental Biology, Massachusetts, USA (1996); Visiting Associate Professor, National Institute for Basic Biology, Japan (2002-2003); Associate Professor, Asamushi Marine Biological Station, Tohoku University (1998-2004); Director (2005-2018), Shimoda Marine Research Center, University of Tsukuba, where he has been a Professor since  2004. He has been President of the Japanese Association of Marine Stations since 2009 and steering member of the World Association of Marine Stations since 2010. He was also a member of the editorial board of the Global Ocean Science Report, UNESCO-IOC (2016-2017). His research interests include cell motility and reproduction of marine invertebrates, fish, algae and other marine organisms; and structure, regulation, diversity and evolution of cilia and flagella.

Jason M. Hall-Spencer holds a PhD from Millport Marine Biological Station, University of London (1995). He had postdoctoral positions working all over Europe before becoming a Lecturer in Marine Biology, University of Glasgow in 2000.  He moved a Royal Society University Research Fellowship (2003-2008) to the University of Plymouth, where he has been Professor of Marine Biology since 2012. He has been a Research Professor at the University of Tsukuba since 2016. He is a member of the Economics of Ocean Acidification working group (funded by the IAEA Monaco), a UK Government Scientific Advisor on Marine Protected Areas and a member of the ICES working group on deep water ecology.  He served on the IPCC ocean acidification working group (2011-12) and the ICES/OSPAR working group on Ocean Acidification 2013-15 and was Chair of the NERC Facility for Scientific Diving Steering Committee 2014-19.  He is currently President of the British Phycological Society and is helping write the United Nations World Ocean Assessment II.  His research interests include benthic ecology, CO2 seeps, aquaculture, fisheries management and marine conservation.