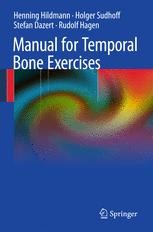 This lavishly illustrated manual includes extraordinary artwork and offers a unique overview of all important structures of, and surgical techniques for, the middle ear and the temporal bone, including:

This manual provides the reader with the knowledge necessary to start operating on patients. It also supports experts to improve and teach their skills.

Prof. Dr. med. Dr. h.c. Henning Hildmann, who died in 2009 following a car accident, was Chairman and Director of the ENT Department of Ruhr University, Bochum from 1979 to 2005. Professor Hildmann was born in Frankfurt in 1939 and studied medicine in his native city and in Innsbruck and Düsseldorf, where he gained his doctorate in 1965. He went on to specialize in ENT under Prof. Dietrich Plester in Tübingen, Germany before becoming Assistant Professor in Kiel and Aachen. Professor Hildmann was renowned worldwide, attending conferences and delivering guest lectures in numerous institutions. He was an honorary member of the Spanish, Bolivian, Slovak, Polish, and Mongolian ENT Societies and of the otological societies of Ukraine, India, and Greece. Professor Hildmann’s main clinical interests were otology, cochlear implantation, and skull base surgery and his research focused especially on middle ear pathology. He was the author or co-author of more than 200 publications, and author or editor of several books. After retirement, he was a frequent speaker and guest surgeon in numerous European and other countries.

Professor Rudolf Hagen is Chairman of the Department of Otorhinolaryngology, Head and Neck Surgery at the University of Würzburg, Germany. After receiving his MD from the University of Würzburg, he gained his Habilitation in 1991 and then obtained further qualifications in plastic and reconstructive surgery, allergology, and phoniatrics. In 1998 he became Medical Director of the Clinic for Otorhinolaryngology, Head and Neck, and Plastic Surgery at Katharinen Hospital in Stuttgart and moved to his current position in 2005. Professor Hagen has received various awards, including the Anton-von-Tröltsch Prize from the German Society for Otorhinolaryngology, Head and Neck Surgery. He has been Visiting Professor at the Universidad Cayetano Heredia, Lima, Peru and the People’s University, Beijing, China and received a Doctor honoris causa from the University of Ulan Bator, Mongolia. He has been a member of various professional organizations and their committees, and has had extensive links to universities and hospitals across the world.