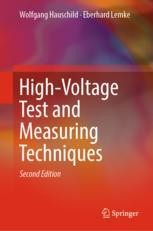 The new edition of this book incorporates the recent remarkable changes in electric power generation, transmission and distribution. The consequences of the latest development to High Voltage (HV) test and measuring techniques result in new chapters on Partial Discharge measurements, Measurements of Dielectric Properties, and some new thoughts on the Shannon Theorem and Impuls current measurements.

This standard reference of the international high-voltage community combines high voltage engineering with HV testing techniques and HV measuring methods. Based on long-term experience gained by the authors the book reflects the state of the art as well as the future trends in testing and diagnostics of HV equipment. It ensures a reliable generation, transmission and distribution of electrical energy. The book is intended not only for experts but also for students in electrical engineering and high-voltage engineering.

Wolfgang Hauschild received the Diploma degree in 1965, the Ph.D. in1970 and the habilitation (university lecturing qualification) in 1976 from the Technical University (TU) of Dresden, Germany. In 2007 he became doctor honoris causa of the Technical University of Graz, Austria. From 1966 to 1979 he was a researcher of TU Dresden managing a research group on SF6 insulation. In 1976/1977 Dr. Hauschild was a guest professor at Damascus University, Syria, and responsible for the erection of a large HV laboratory there. In 1980 he moved to industry and has been in leading positions of HV test equipment production in Dresden, from 1990 to 2007 as the Technical Director of HIGHVOLT Prüftechnik Dresden GmbH. After retirement he is still active as a consultant. Dr. Hauschild was German speaker to IEC TC 42 (HV test technique) from 1995 to 2009 and is a member of IEEE, VDE and CIGRE. He published two books and numerous papers on HV engineering, especially HV testing.

Eberhard Lemke graduated from the Technical University (TU) Dresden in 1962 where he was involved in research and education in the field of high voltage engineering for more than three decades and received the PhD degree and Dr.sc.techn. degree in 1967 and 1975, respectively. In 2010 he was awarded an honorary doctorate (Dr.h.c) from the Technical University Graz, Austria. From 1978 until 1981 he joined a power cable factory in Germany. During this time he developed the so-called Lemke Probe using the non-conventional field coupling mode for PD diagnostics of HV apparatus in service. In 1987 he was appointed Professor at TU Dresden and founded the company Lemke Diagnostics GmbH in 1990 which manufactures among others instruments for PD diagnostics of HV equipment. Eberhard Lemke is author and co-author of several text-books. He published numerous technical papers, holds various patents and is active in several national and international organizations, such as VDE, CIGRE, IEC, and IEEE.