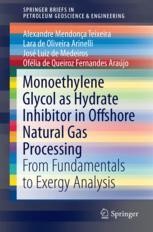 From Fundamentals to Exergy Analysis

This book addresses several issues related to hydrate inhibition and monoethylene glycol (MEG) recovery units (MRUs) in offshore natural gas fields, from fundamentals to engineering aspects and from energy consumption assessment to advanced topics such as exergy analysis. The assessment of energy degradation in MRUs is critical in offshore rigs, and the topic of exergy theory has by no means been completely explored; it is still being developed. The book presents a comprehensive, yet concise, formulation for exergy flow and examines different approaches for the reference state of MEG and definition of the reference environment so as to obtain an effective exergy analysis with consistent results.

It also provides new and useful information that has a great potential in the field of exergy analysis application by assessing energy degradation for three well-known MRU technologies on offshore rigs: the Traditional Atmospheric Distillation Process; the Full-Stream Process; and the Slip-Stream Process. The book then elucidates how the main design parameters impact the efficiency of MEG recovery units and offers insights into thermodynamic efficiency based on case studies of general distillation-based processes with sharp or not too sharp cut, providing ranges for expected values of efficiencies and enhancing a global comprehension of this subject. Since MEG recovery is an energy consuming process  that invariably has to be conducted in a limited space and with limited power supply, the book is a valuable resource for those involved in design, engineering, economic evaluation and environmental evaluation of topside processing on offshore platforms for natural gas production.
Show all
About the authors

Lara de O. Arinelli: She is graduated in Chemical Engineering by the Federal University of Rio de Janeiro, Brazil, and holds a M.Sc. degree with emphasis in process engineering, specifically in the oil and gas field. She is currently a D.Sc. student, while working in parallel in a research project with Petrobras. The main theme of her thesis is natural gas processing, focusing on the development of unit operation extensions of membranes and supersonic separation for simulation purposes. Lara gained an outstanding scholar award (undergraduate student) in 2012 due to her academic performance, B.Sc. degree with honors (cum laude) and in 2015 won the best M.Sc. thesis award from Escola de Química of the Federal University of Rio de Janeiro.