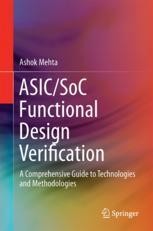 A Comprehensive Guide to Technologies and Methodologies

Ashok Mehta has been working in the ASIC/SoC design and verification field for over 20 years. He started his career at Digital Equipment Corporation (DEC) working as a CPU design engineer. He then worked at Data General, Intel (first Pentium Architecture Verification team) and after a route of couple of startups, worked at Applied Micro and currently at TSMC.

He was a very early adopter of Verilog and participated in Verilog, VHDL, iHDL (Intel HDL) and SDF (standard delay format) technical subcommittees. He has also been a proponent of ESL (Electronic System Level) designs. At TSMC he architected and went into production with two industry standard TSMC ESL Reference Flows that take designs from ESL to RTL while preserving the verification environment for reuse from ESL to RTL.

He holds 14 U.S. Patents in the field of SoC and 3DIC design verification.

He is also the author of Second Edition of the book “SystemVerilog Assertions and Functional Coverage – A comprehensive guide to languages, methodologies and applications”. Springer (June 2016).

Ashok earned an MSEE from University of Missouri.

In his spare time, he is an amateur photographer and likes to play drums on 70’s rock music driving his neighbors up the wall J