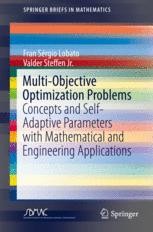 Concepts and Self-Adaptive Parameters with Mathematical and Engineering Applications

This book is aimed at undergraduate and graduate students in applied mathematics or computer science, as a tool for solving real-world design problems. The present work covers fundamentals in multi-objective optimization and applications in mathematical and engineering system design using a new optimization strategy, namely the Self-Adaptive Multi-objective Optimization Differential Evolution (SA-MODE) algorithm. This strategy is proposed in order to reduce the number of evaluations of the objective function through dynamic update of canonical Differential Evolution parameters (population size, crossover probability and perturbation rate). The methodology is applied to solve mathematical functions considering test cases from the literature and various engineering systems design, such as cantilevered beam design, biochemical reactor, crystallization process, machine tool spindle design, rotary dryer design, among others.

Valder Steffen Jr. was born in Rio Claro, Brazil, in 1952. He received his degree on Mechanical Engineering from University of Campinas - Unicamp, Brazil, in 1976. Then, his doctorate and his Habilitation (H.D.R) were both obtained from the Franche-Comté University (Besançon, France) in 1979 and 1991, respectively. His current position is Professor of Mechanical Engineering, School of Mechanical Engineering at the Federal University of Uberlândia, Brazil. His research interests include dynamics of mechanical systems, optimization algorithms, smart structures and materials, and inverse problems in engineering sciences. Prof. Steffen is member of the following professional societies: ABCM, SEM, ABMEC and SBMAC.