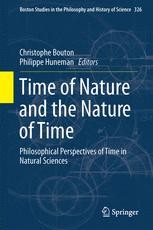 Time of Nature and the Nature of Time

This volume addresses the question of time from the perspective of the time of nature. Its aim is to provide some insights about the nature of time on the basis of the different uses of the concept of time in natural sciences. Presenting a dialogue between philosophy and science, it features a collection of papers that investigate the representation, modeling and understanding of time as they appear in physics, biology, geology and paleontology. It asks questions such as: whether or not the notions of time in the various sciences are reducible to the same physical time, what status should be given to timescale differences, or what are the specific epistemic issues raised by past facts in natural sciences.

The book first explores the experience of time and its relation to time in nature in a set of chapters that bring together what human experience and physics enable metaphysicians, logicians and scientists to say about time. Next, it studies time in physics, including some puzzling paradoxes about time raised by the theory of relativity and quantum mechanics. The volume then goes on to examine the distinctive problems and conceptions of time in the life sciences. It explores the concept of deep time in paleontology and geology, time in the epistemology of evolutionary biology, and time in developmental biology. Each scientific discipline features a specific approach to time and uses distinctive methodologies for implementing time in its models. This volume seeks to define a common language to conceive of the distinct ways different scientific disciplines view time. In the process, it offers a new approach to the issue of time that will appeal to a wide range of readers: philosophers and historians of science, metaphysicians and natural scientists - be they scholars, advanced students or readers from an educated general audience.
Show all
About the authors

Christophe Bouton is Professor of Philosophy at University Bordeaux Montaigne. His research area is focused on the issue of time in the contemporary philosophy. He was Fellow of the Institut Universitaire de France (Research Project 2008-2013: ‘Time: Philosophical and Scientific Approaches’), visiting scholar at the Centre for Time of the University of Sydney (April -July 2012) and at NYU Philosophy Department (April-July 2015), and visiting Professor at the Southern Illinois University Carbondale (Phenomenology Research Center, March 2013). Principal publication on the issue of time: "The Emergence of Time: Kant, Bergson, and Modern Physics”, KronoScope 13:1 (2013) 96-111, Time and Freedom, Chicago, Northwestern University Press, SPEP Series, 2014 (translation of Temps et liberté, Toulouse, Presses Universitaires du Mirail, 2007).
Arial, sans-serif">Philippe Huneman is a Researcher (Directeur de recherche) at the Institut d’Histoire et de Philosophie des Sciences et des Techniques, CNRS/Université Paris I Sorbonne. After having worked and published on the constitution of the concept of organism and Kantian metaphysics, he currently investigates philosophical issues in evolutionary theory and ecology, such as the emergence of individuality, the relations between variation and natural selection in evolutionary theory, the role of the concept of organism, and the varieties of explanations in ecology. He was a visiting professor at the University of Chicago (2005). His research has been published in Erkenntnis, Synthese, Philosophy of Science, Minds and Machines, etc. and as editor he recently published Functions: selection and mechanisms (Synthese Library, Springer, 2012), from groups to individuals. Evolution and emerging individuality (MIT Press, 2013, with Frédéric Bouchard), and Handbook of evolutionary thinking in the sciences (Springer, 2013 translation of Les Mondes Darwiniens, Paris, 2009, ed. with Heams T., Lecointre G., Silberstein M.) He belongs to the editorial board of the European Journal for Philosophy of Science and is the series coeditor of “History, Philosophy and Theory in the Life Sciences” (Springer).

“This is an interdisciplinary edited collection that aims to expand the study of philosophy of time from the usual metaphysical motley crew of issues. …  This book is a good place to begin this exploration.” (Dean Rickles, Journal for General Philosophy of Science, Vol. 50, 2019)

“The variety of topics addressed at a high level of expertise makes one of those books that upon completion of a first reading urge one to go back and start afresh. … This is a book that both teaches and provides fertile ground for philosophical reflection; a ‘must’ for expert and student alike.” (Vassilis Sakellariou, Metascience, August, 2018)