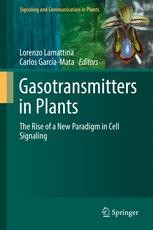 The Rise of a New Paradigm in Cell Signaling

This book describes the three gasotransmitters nitric oxide (NO), hydrogen sulphide (H2S) and carbon monoxide (CO) and their function as intracellular signalling molecules in plants.

Common properties are shared by NO, H2S and CO: they are beneficial at low concentrations but hazardous in higher amounts; they are small molecules of gas; they can freely cross cell membranes; their effects do not rely on receptors; they are generated enzymatically and their production is regulated; their functions can be mimicked by exogenous application; and their cellular effects may or may not be mediated by second messengers, but have specific cellular and molecular targets.

In plants, many aspects of the biology of gasotransmitters remain completely unknown and generate intriguing questions, which will be discussed in this book.

Dr. Lorenzo Lamattina
Lorenzo Lamattina was born in Argentina, where he studied agronomy and biology and obtained his Ph.D. at Mar del Plata University. He did postdoctoral research at the Institut de Biologie Moleculaire des Plantes (IBMP-CNRS) at Strasbourg, France, where he co-discovered the RNA editing in plant mitochondria. In 1991, he joined the Instituto de Investigaciones Biológicas (IIB), University of Mar del Plata, Argentina, as Professor of Cell and Molecular Biology. He chaired the IIB from 2000 to 2004; he is Director of the Molecular and Integrative Physiology Lab, and Superior researcher at the Argentinian Council of Science and Technology (CONICET).He teaches cell biology, plant physiology and molecular advancements to undergraduate and graduate students. His research focuses on pathways, targets and the biochemical and molecular mechanisms underpinning nitric oxide (NO)-mediated processes in plants, microalgae, rhizobacteria and lately, honeybee.His research shed light to the involvement of NO, and the concomitant modulator actions, in many plant physiological aspects like plant nutrition, water deficit, antioxidant capacity, root growth and development, the interaction with plant growth promoting rhizobacteria, cross-talk with phospholipid signaling, etc. More recently, the studies on the interaction with other gasotransmitter, hydrogen sulfide (H2S), opened a new window to understand the complexity of the guard cell physiology and stomatal movement.Lorenzo Lamattina is a member of several learned societies, and has been honored by the ASPB as Top Author in Central and South America between 2004 and 2013. He won the Konex award 2013 in Biochemistry and Molecular Biology, the award Bunge y Born in Plant Biology 2006 and the John Simon Guggenheim Foundation award 2005 for his work on Nítric Oxide-Mediated Processes in Plants.

Dr. Carlos Garcia-Mata
Carlos García-Mata was born in Argentina. He studied biology and obtained his Ph.D. on the laboratory of Professor Lorenzo Lamattina at Universidad Nacional de Mar del Plata. He did postdoctoral research on the Laboratory of Mike Blatt at Glasgow University, Scotland, where he acquires expertise in the field of plant electrophysiology. He went back to Molecular and Integrative Physiology lab at the Mar del Plata University in 2008. He has an Independent Researcher position at the Argentinian Council of Science and Technology (CONICET).His research pioneered the studies of the role of Gasotransmitters in guard cell signaling. His publications reporting the Nitric Oxide (NO) and Hydrogen Sulfide (H2S) functions as stomatal closure promoters, as well as the involvement of NO and H2S on the regulation of ion channels in plants have inspired many plant research groups around the world. He also pioneered, in collaboration with Dr. Ana Laxalt, the interplay between NO-dependent and Phosphatidic Acid-dependent signaling in stomatal closure regulation.