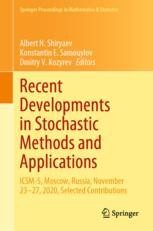 Highlighting the latest advances in stochastic analysis and its applications, this volume collects carefully selected and peer-reviewed papers from the 5th International Conference on Stochastic Methods (ICSM-5), held in Moscow, Russia, November 23-27, 2020. The contributions deal with diverse topics such as stochastic analysis, stochastic methods in computer science, analytical modeling, asymptotic methods and limit theorems, Markov processes, martingales, insurance and financial mathematics, queueing theory and stochastic networks, reliability theory, risk analysis, statistical methods and applications, machine learning and data analysis. The 29 articles in this volume are a representative sample of the 87 high-quality papers accepted and presented during the conference. The aim of the ICSM-5 conference is to promote the collaboration of researchers from Russia and all over the world, and to contribute to the development of the field of stochastic analysis and applications of stochastic models.

Albert N. Shiryaev is a Chief Scientific Researcher at Steklov Mathematical Institute of the Russian Academy of Sciences and the Head of the Probability Theory Department of the Faculty of Mechanics and Mathematics at Lomonosov Moscow State University. He is a Full Member of the Russian Academy of Sciences and the recipient of many honours and awards, including the Markov Prize in 1974, the Kolmogorov Prize in 1994, and the Chebyshev Medal of the Russian Academy of Science in 2017. His numerous other books include Probability [translated by Dmitry M. Chibisov], Limit Theorems for Stochastic Processes [with Jean Jacod], Optimal Stopping Rules [translated by A.B. Aries], Stochastic Disorder Problems [translated by Andrei Iacob], and Statistics of Random Processes [with Robert S. Liptser].
Konstantin Samouylov received his PhD in Probability Theory from the Moscow State University, in 1985, and a Full Doctor of Sciences degree in Telecommunications from the Moscow Technical University of Communications and Informatics in 2005. In 1985–1996, he held several positions at the Faculty of Science of the Peoples' Friendship University of Russia (RUDN University), where he became a head of Telecommunications System Department in 1996. Since 2014, he has been the head of the Applied Probability and Informatics Department, and since 2017, he has also held the position of Director of Applied Mathematics and Communications Technology Institute (IAM&CT) at RUDN University. He was visiting professor/professor-research at Lappeenranta University of Technology and Helsinki University of Technology (Aalto), Finland; Moscow Technical University of Telecommunications and Informatics, Russia; Moscow International Higher Business School (Mirbis), Russia; and University of Pisa, Italy. He was a member of the ITU-T SG11 and IFIP TC6 WG 6.7. He has worked in a number of R&D projects within different frameworks, e.g., COST IRACON, projects of Russian Foundation for Basic Research (RFBR), TEKES (Finland) and companies including Nokia, Telecom Finland, VTT, Rostelecom, etc. He is a member of editorial boards and reviewer of several scientific journals, and he is co-chair and TPC member of several international conferences. His current research interests include applied aspects of Probability Theory and Stochastic Processes, Queuing and teletraffic theory, performance analysis of 5G/5G+ networks, resource allocation in heterogeneous wireless networks, social networks, and big data analysis. He has authored and co-authored over 150 scientific and conference papers and six books. Prof. Samouylov’s honors include the 2018 IEEE GLOBECOM Conference Best Paper Award.

Dmitry V. Kozyrev received his Ph.D. degree in Physics and Mathematics in 2013. Since 2007, he has been working at the Department of Probability Theory and Mathematical Statistics of the Peoples' Friendship University of Russia (RUDN University). Since 2013, he is an Associate Professor at the Department of Applied Probability and Informatics (RUDN University) and a Senior Research Fellow at the V.A. Trapeznikov Institute of Control Sciences of Russian Academy of Sciences, Moscow, Russia. He is a member of the reviewer board of several scientific journals, as well as proceedings editor and member of organizing / program committee of several international conferences. His current research activities include Stochastic Modeling, Reliability Assessment and Performance analysis, Sensitivity analysis, Modeling and Simulation of repairable systems, Applied Probability. He has authored and co-authored over 80 published papers.