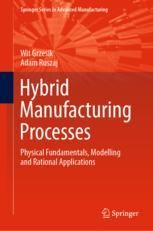 This book explores, in a systematic way, both conventional and unconventional material shaping processes with various modes of hybridization in relation to theory, modelling and industrial potential. The demand for high productivity and high accuracy in manufacturing is continuously increasing, based on improvement and optimization strategies. Hybridization of manufacturing processes will play a crucial role and will be of a key importance in achieving environmental and economical sustainability.

Structured in three parts, Hybrid Manufacturing Processes summarizes the state-of-the art hybrid manufacturing processes based on available literature sources and production reports. The book begins by providing information on the physical fundamentals of the removal and non-removal processes in macro-, micro and nanoscales. It then follows with an overview of the possible ways of hybridization and the effects on the enhancement of process performance, before concluding with a summary of production outputs related to surface integrity, specifically with respect to difficult-to-machine materials.

Considering the applications of different sources of hybridization including mechanical, thermal and chemical interactions or their combinations, this book will be of interest to a range of researchers and practicing engineers within the field of manufacturing.

Wit Grzesik is a full professor in the field of Mechanical Engineering. He received his MS degree (1973), PhD (1981) and DSc degree (1988) all in mechanical engineering. After production practice (1973-1975) he was developed his academic career as a Research Scientist (1975-1981), Assistant Professor (1982-1988), Associate Professor (1988-1999) and Full Professor of Mechanical Engineering and the Head of the Department of Manufacturing Engineering (1992-2015) at the Opole University of Technology. Prof. W. Grzesik has published about 300 papers in journals and conference proceedings, four reference books and nine chapters in books which induced in about 2600 citations and Scopus- h-Index: 29. The main research interests include advanced machining processes, surface integrity, surface metrology, and hybrid manufacturing processes.

Adam Ruszaj is a full professor in the field of Mechanical Engineering. He received his degrees: MS (1971), PhD (1977), DSc degree (1990) and Full Professor of Mechanical Engineering (2000). He was employed as Research Scientist (1971-1977), Assistant Professor (1978-1990), Associate Professor (1990-1999) and Full Professor of Mechanical Engineering (2000 – up to now) at the: industrial Institute of Advanced Manufacturing Technology (1971 – 2008), Cracow University of Technology (2006 – 2018 – since 2018-senior professor) and State University of Applied Sciences in Nowy Sącz (2000 – up to now; 2002 – 2006 and since 2016 – Head of Engineering Institute). The main results of his research are implemented in industry as machine tools (15-th) and unconventional technologies, published in over 290 papers, 2 – chapters and 1 - book (Scopus- h-Index: 9; 254 citations). He specializes in unconventional manufacturing systems and processes (ECM, EDM, LBM, hybrid manufacturing processes, micro and nanomanufacturing) and bionic engineering.