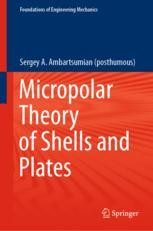 Micropolar Theory of Shells and Plates

For the first time, the Micropolar Theory of Elasticity is applied to solving a wide variety of problems connected to the specifics of nanomaterials. Namely, their unique physical-mechanical characteristics and behaviors under various stress-induced conditions.

These theories have been constructed based on the equations of the classical theory of elasticity as well as other equations that have till now remained untouched in their application to molecular theories of solid deformable media. The book also introduces a new applied micropolar theory of thin shells which is based on Cosserat's pseudo-continuum. It explores the theory’s application to a category of nanomaterial shells and plates previously neglected from classical theories due to their unconventional size and structure.  Theoretical results are accompanied by solutions of certain problems, essential for various applications.

The book consists of six chapters. The first chapter is a review of the essential data on the non-symmetric theory of elasticity. The second and third chapters are devoted to various theories of plate bending and solutions to some basic problems. Chapter four refers to membrane or, so-called, momentary shell theory. Chapter five deals with the theory of very shallow shells. Finally, chapter six presents the geometry of the nonlinear theory of plates and the theory of very shallow shells.

The book is intended for researchers, postgraduate students, and engineers, interested in the design of structures from nanomaterials and in the problems of mechanics of deformable bodies, theories of shells and plates, and their applications in micromechanics.

Academician S. A. Ambartsumian was born on 17 March 1922 in Aleksandropol (present day Gyumri), Armenia. In 1942, he graduated from the Yerevan Polytechnic Institute and in 1952, at the young age of 30, he became a Doctor of Technical Sciences and made a Professor a year later. These were unique achievements in the Soviet Union. In 1956 he was elected a Corresponding Member and in 1965 an Academician of the Armenian Academy of Sciences.

From 1955 until 1977 he was the Director of the Institute of Mechanics of the Academy of Sciences of Armenia.  His research in the fifties and sixties focused on the theory of anistoptric plates and shells culminating in two landmark books, namely, Theory of Anistropic Shells (1961) and Theory of Anistropic Plates (1967), both later translated into English. Throughout his career, he continued to develop plate and shell theories involving materials with additional complexities, especially those that coupled with electromagnetic fields.   He employed these to make parametric studies of their behaviours and limits of application.  Throughout the course of his work, he published scores of papers and more than 20 books.

Professor Ambartsumian was elected an Academician of the Academy of Sciences of Armenia in 1965, acting as its Vice President between 1974-1977. In 1961 he was elected a member of the Presidium of the National Academy of Theoretical and Applied Mechanics of the USSR (later Russia).  From 1977-19991 he served as President of Yerevan State University.

His scientific activities earned him several medals including the SJ Vavilov Medal in 1997, a Merits-in-Science Medal from Yerevan State University in 1985, a medal of Merit from the University of Montpelier (France) in 1986, and a Great Silver Medal and Prize from the International Engineering Academy in 2000.  He received an honorary doctorate from Bratislava University in 1984 and was elected an Academician of the International Academy of Astronautics in 1985.

Until his death in 2018, he served as Honorary President of the Armenian Society of Mechanics (which he founded in 1998) and Editor-in-Chief of the Proceedings of the National Academy of Sciences of the Republic of Armenia.