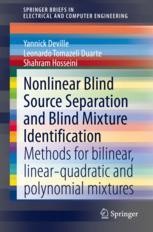 This book provides a detailed survey of the methods that were recently developed to handle advanced versions of the blind source separation problem, which involve several types of nonlinear mixtures. Another attractive feature of the book is that it is based on a coherent framework. More precisely, the authors first present a general procedure for developing blind source separation methods. Then, all reported methods are defined with respect to this procedure. This allows the reader not only to more easily follow the description of each method but also to see how these methods relate to one another. The coherence of this book also results from the fact that the same notations are used throughout the chapters for the quantities (source signals and so on) that are used in various methods. Finally, among the quite varied types of processing methods that are presented in this book, a significant part of this description is dedicated to methods based on artificial neural networks, especially recurrent ones, which are currently of high interest to the data analysis and machine learning community in general, beyond the more specific signal processing and blind source separation communities.

Yannick Deville was born in Lyon, France, in 1964. He graduated from the Ecole Nationale Supérieure des Télécommunications de Bretagne (Brest, France) in 1986. He received the D.E.A and Ph.D. degrees, both in Microelectronics, from the University of Grenoble (France), in 1986 and 1989 respectively. From 1986 to 1997, he was a Research Scientist at Philips Research Labs (Limeil, France). His investigations during that period concerned various fields, including GaAs integrated microwave RC active filters, VLSI cache memory architectures and replacement algorithms, neural network algorithms and applications, and nonlinear systems. Since 1997, he has been a Full Professor (now a so-called “Exceptional Class Professor”) at the University of Toulouse (France). From 1997 to 2004, he was with the Acoustics lab of that University. Since 2004, he has been with the Astrophysics lab in Toulouse, which is part of the University and of the French National Center for Scientific Research (CNRS). As from 1994, he has been the coordinator of his successive research groups. In addition, since 2011, he has been leading the “Signal, Image in Universe Sciences” research team of his lab. His current major research interests include signal and image processing (especially hyperspectral data), higher-order statistics, time-frequency analysis, neural networks, quantum entanglement phenomena, and especially Blind Source Separation and Blind Identification methods (including Independent or Sparse Component Analysis and Nonnegative Matrix Factorization) and their applications to Remote Sensing, Astrophysics and Quantum Information Processing. Yannick Deville has more than 300 publications (see details at http://userpages.irap.omp.eu/~ydeville/publi.html ), including a single-author book and 12 book chapters (one in Wiley Encyclopedia of Electrical and Electronics Engineering). He owns 25 patents and Soleau envelopes. He participated in several international research projects (e. g. SPECPDR for NASA, MUSE for ESO and EUCLID for ESA) and in was in charge of various contracts with private companies. He was a program co-chairman and co-editor of the Proceedings of the 2018 edition of the main international conference in his field. He also participated in the organization of the following conferences: ICA'99, ECMS'99, ECM2S'2001, ECMS 2003, ICA 2004, ECMS 2005, ICA 2006, ECMS 2007, EUSIPCO 2007, ICA 2007, CARI'08, ICA 2009, ECMS 2009, LVA/ICA 2010, ECMS 2011, LVA/ICA 2012, EUSIPCO 2012, WOSSPA 2013, ECMSM 2013, MLSP 2013, IWAENC 2014, MLSP 2014, ECMSM 2015, LVA/ICA 2015, MLSP 2015, MLSP 2016, LVA/ICA 2017, ECMSM 2017, MLSP 2017, MLSP 2018, WHISPERS 2018, SPML 2018, WHISPERS 2019, MLSP 2019, SPML 2019, WSPML 2019. He organized and/or chaired various sessions in these and other international conferences.

Leonardo Tomazeli Duarte received the B.S. and M.Sc. degrees in electrical engineering from the University of Campinas (UNICAMP), Brazil, in 2004 and 2006, respectively, and the Ph.D. degree from the Grenoble Institute of Technology (Grenoble INP), France, in 2009. Since 2011, he has been with the School of Applied Sciences (FCA) at UNICAMP, Limeira, Brazil, where he is currently an assistant professor. He is also a member with the Laboratory of Data Analysis and Decision Aiding (LAD2/CPO) and with the Laboratory of Signal Processing for Communications (DSPCom lab). He is a Senior Member of the IEEE. His research interests include the theory of unsupervised signal processing and include signal separation, independent component analysis, Bayesian methods, and applications in chemical sensors and seismic signal processing. He is also working on unsupervised data processing in the context of multiple-criteria decision aiding. He has been a visiting professor (2016) at the Grenoble Institute of Technology (Grenoble INP, France).

Shahram Hosseini was born in Shiraz, Iran, in 1968. He received the B.Sc. and M.Sc. degrees in electrical engineering from the Sharif University of Technology, Tehran, Iran, in 1991 and 1993, respectively, and the Ph.D. degree in signal processing from the Institut National Polytechnique, Grenoble, France, in 2000. He is currently an Associate Professor at the University of Toulouse, France. Since 2004, he has been with the Astrophysics lab in Toulouse, which is part of the University and of the French National Center for Scientific Research (CNRS). His research interests include blind source separation, artificial neural networks, and adaptive signal processing. He is author or co-author of more than 100 peer reviewed scientific papers, and participated in several international research projects.