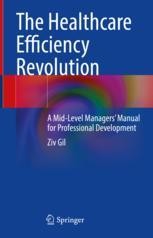 In recent years, improving efficiency in healthcare facilities in general, and in hospitals specifically, has become increasingly important. This book provides essential information on the powerful performance results that can be achieved when patient-centered efficiency reforms are implemented within health management systems. Created for departmental and institutional healthcare professionals, this book offers intuitive guidelines, technical tools, and work procedures to comprehensively analyze all aspects of current operations and reconfigure assets in pursuit of serving more patients, reducing costs, and generating revenues. This work is particularly valuable as its focuses on the most basic service unit in any given hospital (department/unit) and on methodologies for enhancing management practice and creating internal cultures of continual change and ongoing development.

The book provides effective and lasting solutions that reduce E.R. and physician consultation wait times, complications and hospital readmissions, and laboratory tests performed, as well as increase O.R. productivity, annual numbers of patients served, and overall rates of staff and patient satisfaction. Also addressed are how best to handle moments of crisis (such as COVID-19); ethical and legal concerns; and the hiring, development, promotion, and empowerment of staff. Dedicated sections analyze ways to minimize disruptive behavior among physicians, nurses, and other personnel, and present strategies for improving department meetings, particularly in an era of social distancing.

The book also describes how to maximize outcomes through multi-disciplinary approaches, the use of core performance metrics, ongoing data collection and analysis, simple reporting protocols, transparency, and the adoption of technological aids, including dedicated apps. Everything presented in this work has been put into practice. They achieved substantial and sustainable improvements in service delivery – all with little or no change in staff, budgets, and other resources already at hand. This book will help specialists and medical managers in the healthcare market to more effectively use their own resources to achieve levels of performance and success objectives they might otherwise have thought were unattainable.

Since 2012, Prof. Ziv Gil, MD, PhD has been the chairman of the Department of Otolaryngology-Head and Neck Surgery at the Rambam Health Care Campus/Technion-Israel Institute of Technology in Haifa. During the same period, he has served as director of the Applied Cancer Research Laboratory at Rambam's Rappaport Family Institute for Research in the Medical Sciences/Technion Integrated Cancer Center. From 2008-2012, he worked at Tel Aviv Medical Center, where he served, in turn, as director of its Skull Base Surgery Service, Applied Cancer Research Laboratory, and Head and Neck Surgery Unit. Between 2006 and 2008, he was a Visiting Fellow at the University of Pittsburgh Medical Center's Center for Minimally Invasive Skull Base Surgery, and a Clinical Fellow at New York's Memorial Sloan Kettering Cancer Center. Prior to this, he was a Postdoctoral Research Fellow in the Department of Physiology and Biophysics at the University of Miami's School of Medicine.

His research has been funded by numerous Israeli and international agencies, including the Israel Cancer Research Fund for which he was a Barbara S. Goodman Endowed Investigator and a supported professional in the Jacki and Bruce Barron Cancer Research Scholars’ Program. He is the recipient of the 2018 Youdim Family Prize for Excellence in Cancer Research, as well as many other awards, including those from the Israeli Parliament and the New York Head and Neck Society.

He is the leader of several international consortia in head and neck cancer, including the International Consortium for Outcome Research and the Adenoid Cystic Carcinoma International Study Group. In 2014, he established the Comprehensive Head and Neck Center on the Rambam Health Care Campus, the first of its kind in in Israel. Since then, he has founded several entrepreneurial ventures for the development of new medical devices, artificial intelligence, drug delivery systems, and medical software. To reduce costs, increase revenue, and improve the organizational performance of hospitals and other medical care facilities, Prof. Gil has also been engaged in modeling new approaches to and introducing tools for healthcare management.

For eight years, he has been working with Palestinian colleagues to promote ongoing healthcare initiatives in the West Bank and Gaza. Their joint collaboration is assisting Palestinian organizations and institutions to independently deliver quality, high-level medical services, and fostering a partnership between nations.