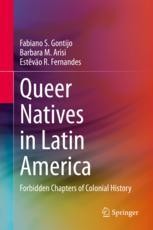 This book defies long standing assumptions about indigenous societies in the Americas and shows that non-heteronormative sexualities were already present among native peoples in different regions of what is now Latin America before the arrival of European colonizers. Presenting data collected from both literature and field research, the authors give examples of native queer traditions in different cultural regions, such as Mesoamerica, the Amazon and the Andes, and analyze how colonization gradually imposed the models of sexuality and family organization considered as normal by the European settlers using methods such as forced labor, physical punishments and forced marriages.
Building upon post-colonial and queer theories, Queer Natives in Latin America: Forbidden Chapters of Colonial History reveals a little known aspect of the colonization of the Americas: how a bureaucratic-administrative, political and psychological apparatus was created and developed to normalize indigenous sexuality, shaping them to the colonial order.

Fabiano de Souza Gontijo is anthropologist, professor at the Graduate Program in Anthropology, Federal University of Pará (UFPA), Brazil, and researcher at the National Council for Scientific and Technological Development (CNPq) in Brazil. He holds a PhD in Social Anthropology from the École des Hautes Études en Sciences Sociales, France, and develops research about sexual diversity, gender, nationalism and power.

Barbara M. Arisi is an anthropologist, journalist and associate professor at the Federal University of Latin American Integration (UNILA), in Foz do Iguaçu, Paraná, Brazil, where she was the Dean of the Latin American Institute of Arts, Culture and History. She holds a PhD in Social Anthropology from the Federal University of Santa Catarina, Brazil, with a PhD internship at the University of Oxford, UK, and is currently a visiting scholar at the Vrije Universiteit Amsterdam, the Netherlands. She works with the Matis indigenous people from the Vale do Javari, Amazon, has written about indigenous cosmologies, sexualities economy and their demands in environmental arenas, and is one of the authors of Gay Indians in Brazil: Untold Stories of the Colonization of Indigenous Sexualities (Springer, 2017).

Estevão R. Fernandes is an anthropologist and associate professor at the Federal University of Rondonia, Brazil. He holds a PhD in Social Sciences from the University of Brasília, Brazil, and was a visiting scholar at Duke University (North Carolina, 2014) under the advisorship of Professor Walter D. Mignolo. He also was Craig M. Cogut Visiting Professor at the Center for Latin American and Caribbean Studies at Brown University (2019-2020). He has published articles in Latin American and European journals about indigenous policy in Brazil and indigenous cosmology. In recent years, has dedicated his studies to understand the Brazilian indigenous sexual universe and to researches about the indigenous sexual diversity in the Brazilian Amazon, where he lives. He is one of the authors of Gay Indians in Brazil: Untold Stories of the Colonization of Indigenous Sexualities (Springer, 2017) and the author of Existe Índio gay? (Brazil Publishing, 2019).