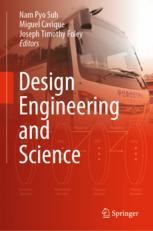 Design Engineering and Science teaches the theory and practice of axiomatic design (AD). It explains the basics of how to conceive and deliver solutions to a variety of design problems. The text shows how a logical framework and scientific basis for design can generate creative solutions in many fields, including engineering, materials, organizations, and a variety of large systems.

Learning to apply the systematic methods advocated by AD, a student can construct designs that lead to better environmental sustainability and to increased quality of life for the end-user at the same time reducing the overall cost of the product development process. Examples of previous innovations that take advantage of AD methods include:

•             microcellular plastics with enhanced toughness and lower weight; and

•             organizational changes in companies and universities resulting in more efficient and competitive ways of working.

The book  is divided into two parts. Part I provides detailed and thorough instruction in the fundamentals of design, discussing why design is so important. It explains the relationship between and the selection of functional requirements, design parameters and process variables, and the representation of design outputs. Part II presents multiple applications of AD, including examples from manufacturing, healthcare, and materials processing.

Following a course based on this text students learn to create new products and design bespoke manufacturing systems. They will gain insight into how to create imaginative design solutions that satisfy customer needs and learn to avoid introducing undue complexity into their designs. This informative text provides practical and academic insight for engineering design students and will help instructors teach the subject in a novel and more rigorous fashion. Their knowledge of AD will stand former students in good stead in the workplace as these methods are both taught and used in many leading industrial concerns.

Nam P. Suh is the author of seven books (by Oxford University Press, McGraw Hill, Prentice Hall) and more than 300 papers in the field of tribology, design, manufacturing processes, materials, and software. He also received more than 100 patents on products, new materials, manufacturing processes and systems, electric transportation systems, and tribological systems. Professor Suh is the recipient of many awards from scholarly and professional organizations, including the ASME Medal, the General Pierre Nicolau Award, Ho-Am Prize, the Hills Millennium Award, the Mensforth International Gold Medal, and many others.
He has received ten honorary degrees, (1986) Eng. D. (Hon.), Worcester Polytechnic Institute, Worcester, MA., (1988) L.H.D. (Hon.), University of Massachusetts-Lowell, Lowell, MA, (2000) Tekn.Dr. hc, Royal Institute of Technology, Stockholm, Sweden, (2007) D. Eng honoris causa, The University of Queensland, Brisbane, Australia, (2007) Doctor Scientiarum Honoris Causa, the Technion, Israel Institute of Technology, Israel, (2008) Doctor of Science and Technology (Hon), Carnegie Mellon University, Pittsburgh, PA, (2009) Doctor Honoris Causa, Babeș-Bolyai University, Cluj-Napoca, Romania, (2012) Honorary Doctor of Philosophy, Bilkent University, Ankara, Turkey, (2013) Doctor Honoris Causa, Universidade Nova de Lisboa, Lisbon, Portugal, (2017) Doctor Honoris Causa, Gheorghe Asachi Technical University (TU) of Iași, Romania.
MIT established the Nam Pyo Suh Professorship in Mechanical Engineering at MIT with a significant gift donated by Mr. Hock Tan, CEO, Avago, Inc. (2015). He served at the U.S. National Science Foundation as an appointee of President Ronald Reagan and confirmed by the U.S. Senate, as the president of KAIST in Korea, and as the Cross Professor and the Head of Mechanical Engineering at MIT. Many of his former students are world leaders in their respective fields.
Professor Suh feels fortunate that he had to have many jobs as an undergraduate at MIT to pay for his living expenses. Sometimes, he had three part-time jobs concurrently. One of these jobs involved repairing a demonstration apparatus for class demonstrations in the “Steam Lab” of MIT. He learned a lot about the history of technology evolution through this job. (In hindsight, it appears that the post was created for him by his professors to help his finance.) His professional awakening came when he got a job in a small company and was given the responsibility of developing an industrial product, including its manufacturing processes and machines. He was the only engineer in the small company, although he has not yet finished his undergraduate education. The machine and manufacturing processes he designed in his first industrial job are still in operation. His second industrial job also involved developing manufacturing processes and machine systems to manufacture consumer products. He finished the project in four months, including the field testing of products made by the new machine and process he designed and created.
Many years later, he realized that the design, as well as many others, satisfied functional independence, i.e., the Independence Axiom. Because of the success of this project, the company funded his doctoral study at a full salary. After getting his tenure at MIT, he began to think about design because he was given the job of creating a new interdepartmental laboratory. He identified the need to put experientially-based subjects such as design and manufacturing on a firm scientific basis to provide a generalizable and logical foundation based on fundamental design principles. The experience he gained as an undergraduate student working on various jobs, as well as his industrial jobs, provided the foundation for a coherent framework for design and the design axioms.
Since then, he has created many new products and processes, including the On-Line Electric Vehicle (OLEV), Mobile Harbor (MH), and many others. He also taught Axiomatic Design in numerous industrial firms throughout the world. This textbook is an attempt to convey the intellectual excitement and satisfaction of creating something new, through design, to students interested in creating rational artifacts to advance and satisfy human aspirations.
Miguel Cavique is Professor at the Naval Academy, Portugal, in the Naval Engineering fields of Mechanics. Since the 80s, he worked at the Electricity of Portugal (EDP), IBM, and Polytechnic Institute of Setúbal, and ruled industrial and commercial companies. He shared the academic activity with consultancy and design activities on air-conditioning design and energy auditing of buildings. He has been a member of the Scientific Committee of many conferences, key-note speaker, and peer review of Elsevier journals. He is a lifelong specialist in air-conditioning by the Chartered Association of Engineers in Portugal and a member of ASHRAE. He devoted the last decade to the application of Axiomatic Design to large systems, on Naval Industry, and recently in the military field.

Joseph Timothy Foley is an assistant professor at Reykjavik University, teaching topics in mechatronics and mechanical design which make heavy use of Complexity Theory, Axiomatic Design, and product design processes. He was born in New Hampshire and completed his education at MIT (B.Sc. ‘99, M.Eng., ‘99, Ph.D. ‘07). He has been a researcher at the MIT Auto-ID Center, MIT Environmentally Benign Manufacturing center, and iRobot Government and Industrial Engineering division. He holds patents in RFID IoT, RFID Security, and enhanced Shape Memory Alloy actuators. He is a reviewer for the International Journal of Production Research and Journal of Engineering Design. He hosted the 12th International Conference on Axiomatic Design (ICAD2018) at Reykjavík University in Iceland. He is on the board of the Axiomatic Design Research Foundation and has been a member of the Axiomatic Design Scientific Committee since 2017.