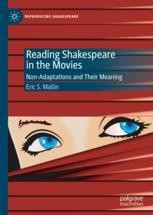 Reading Shakespeare in the Movies

Reading Shakespeare in the Movies: Non-Adaptations and Their Meaning analyzes the unacknowledged, covert presence of Shakespearean themes, structures, characters, and symbolism in selected films. Writers and directors who forge an unconscious, unintentional connection to Shakespeare’s work create non-adaptations, cinema that is unexpectedly similar to certain Shakespeare plays while remaining independent as art. These films can illuminate core semantic issues in those plays in ways that direct adaptations cannot. Eric S. Mallin explores how Shakespeare illuminates these movies, analyzing the ways that The Godfather, Memento, Titanic, Birdman, and The Texas Chainsaw Massacre take on new life in dialogue with the famous playwright. In addition to challenging our ideas about adaptation, Mallin works to inspire new awareness of the meanings of Shakespearean stories in the contemporary world.

Eric S. Mallin is Associate Professor at The University of Texas at Austin, USA. He is the author of Godless Shakespeare (2007) and Inscribing the Time: Shakespeare and the End of Elizabethan England (1996). He has received several teaching awards including the President's Associates' and the Texs Exes' honors. He specializes in Shakespeare, cinema, and the nexus of sexuality and religion in the English Renaissance.

“Eric Mallin prefers films which don’t know they’re Shakespeare plays, because they’re freer and more inventive than yet more adaptations. Some of his readings are unforgettable. And his supple—sometimes funny, often beautiful—prose leads its reader through a maze of moods and morals. Ultimately, his book dares to present ‘non-adaptation’ as a kind of ethical judo throw which turns Shakespeare’s authority and power against his worst ideological effects. This is criticism at its most liberated, sceptical, brilliant and committed. Read it and think again.” (Ewan Fernie, Chair, Professor and Fellow, the Shakespeare Institute, University of Birmingham, UK)

“Clever, timely, and compelling, Reading Shakespeare in the Movies: Meaning and the Non-Adaptation highlights the “disruptive analogies” that emerge from explorations of unexpected Shakespearean resonances in major films, ranging from The Godfather and Titanic to Birdman and Three Billboards Outside of Ebbing, Missouri. The book is a masterful study in the joy of discovery—and recovery—of the surprising affinities, intractable questions, and disturbing continuities that inform popular culture and mass entertainment in Shakespeare’s day and our own time.” (Courtney Lehmann, Tully Knoles Professor of the Humanities, University of the Pacific, USA)

“Reading Shakespeare in the Movies accounts for ‘movies that do not know they are Shakespeare plays,’ and promises to be an unusual, and welcome, contribution to adaptation studies. Eric Mallin synthesizes literary and film theory, deftly reading drama and cinema in productive tension with one another.” (Scott Newstok, author of How to Think Like Shakespeare (2020))